HOLIDAY SPECIAL: THANKSGIVING TRADITIONS
START YOUR 2023 TRAVELING 
OUR BEST PROMOTIONS ARE HERE!
SHOPPING AROUND “THE BIG APPLE” 
TIPS FOR YOUR FIRST CRUISE 
VIVA MEXICO AND ALL ITS DESTINATIONS!
THE DOMINICAN REPUBLIC, IS MORE THAN JUST BEAUTIFUL...
7 DAYS IN SAN FRANCISCO
GRUPO XCARET’S AMAZING EXPERIENCE
WHICH IS THE BEST DISNEY PARK?
Tag:

For us at Royal Holiday, it is a real pleasure to offer all our members the best low-season deals so you can take all the advantages of our membership in different destinations around the globe. This time we are sure you won’t miss it: Paris, the heart of Europe, a synonym of love, culture, architecture, food and fashion, one of the most stunning cities on the planet. We, at Royal Holiday, offer you this great opportunity: Book 5 nights for the Price of 4 and travel on May and June to the Citadines Bastille Gare de Lyon, in the heart of the Bastille-Nation-Gare de Lyon triangle. Or, if you prefer, The Citadines Prestige Les Halles, where you book 4 nights and pay just 3, traveling on March and April. Both of them, magnificently appointed apartment-style hotels, strategically located and surrounded by museums, shops, cinemas, restaurants and theaters. All you love from Paris within walking distance. Paris is a city that doesn’t need any introduction. It is a dream destination for millions every year, a place which gives the tourist one surprise after another: from the classic Eiffel Tower to the splendor of the Jardin des Tuileries to the petit bistros that burst the sidewalks. In Paris, you find iconic landmarks everywhere, fashionable shopping in The Champs-Élysées and Rue St-Honoré, fantastic food from high cuisine to local delights, abundant art sites from the impressive Louvre to the little Rodin. And of course, Paris is also the Seine, where an evening promenade is a joyful experience of romantic views of old bridges scattering the shoreline linking the Île Saint-Louis and the Île de la Cité to the main city. The Seine walk takes the tourist from the Louvre museum to the notorious Notre Dame Cathedral. Besides Paris’ visual magnificence, the city’s cultural value is not easily surpassed by any other place in Europe. As a result of migrations from diverse corners of the world, the city is a mixture of different ethnic communities that makes its cultural life very rich. A district like Strasbourg-Saint Denis is the place of the Caribbean culture as well as a whole area devoted to Indian cuisine. The Jewish community is hosted in the Marais and eastern cultures are mainly found in neighborhoods like Belleville and La Goutte d’Or, in the Northeastern part of the city. Along with its cultural diversity, Paris is also known as a city of new ideas. A good example is the famous Café de Flore, where the Surrealistic movement used to meet, by the left bank’s Saint-Germain-des-Prés area. It was the place of enlightenment for all kind of intellectuals, like Picasso, Giacometti, Sartre, and many others. 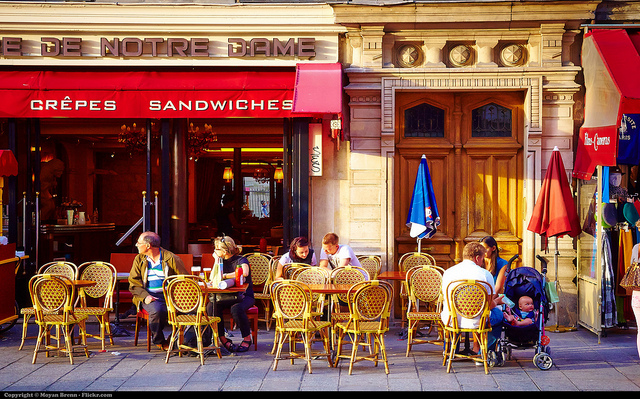 Top 5 things not to miss in Paris

As the Louvre is the world’s largest museum and the most visited, there will never be enough time to go around the multi-level set of galleries that take you from the Mona Lisa to the Venus de Milo and the Egyptian mummies. The deep soul of this extraordinary museum is the vast collection of masterpieces, collected and modified from centuries, that changes even in the present day. If you need a rest, don’t forget the  Café Mollien, on top of the grand Mollien stairs.

This is by far the most famous building in the world. The tower was built by engineer Gustave Eiffel, for the 1889 World Fair and the centenary of the Revolution. The sights over Paris are remarkable from the tower. At the third level, there’s a viewing platform and also a champagne bar and the famous Jules Verne restaurant, starred in the Michelin guide.

Built between 1163 and 1334, this Gothic jewel represented Paris’ glory at that time. If you want to appreciate its stonework, climb up the towers and get the best view of the celebrated gargoyles.

Located on the highest and most north Paris’ hill, it remains the most romantic part of Paris. Let yourself go by the moody cafés along Rue des Abbesses, Rue des Trois Frères and Rue des Martyrs. Enjoy the vibe of the artists attracted to the area, for instance Renoir and Toulouse-Lautrec in the 19th century.

Opened in 1848, Le Bon Marché is the oldest department store of Paris. High class boutiques like Dior and Chanel have a place on the ground floor. A set of elegant escalators take you up to the fashion floor where world designers like Lanvin or Claudie Pierlot are part of the exclusive selection. We, at Royal Holiday hope you take advantage of this great deal to visit Paris. And do not miss our offers, visit our web page at www.royal-holiday.com